by KWASI MINTAH
in Business, News
0

0
SHARES
139
VIEWS
Share on FacebookShare on TwitterShareShare on Whatsapp

The President, Nana Addo Dankwa Akufo-Addo, has urged the next generation of African leaders to seek peace and prosperity for the long-suffering masses on the African continent.

According to President Akufo-Addo, “If we are going to build prosperous countries, we should have peace, and those who would lead Africa must seek and cherish peace.” 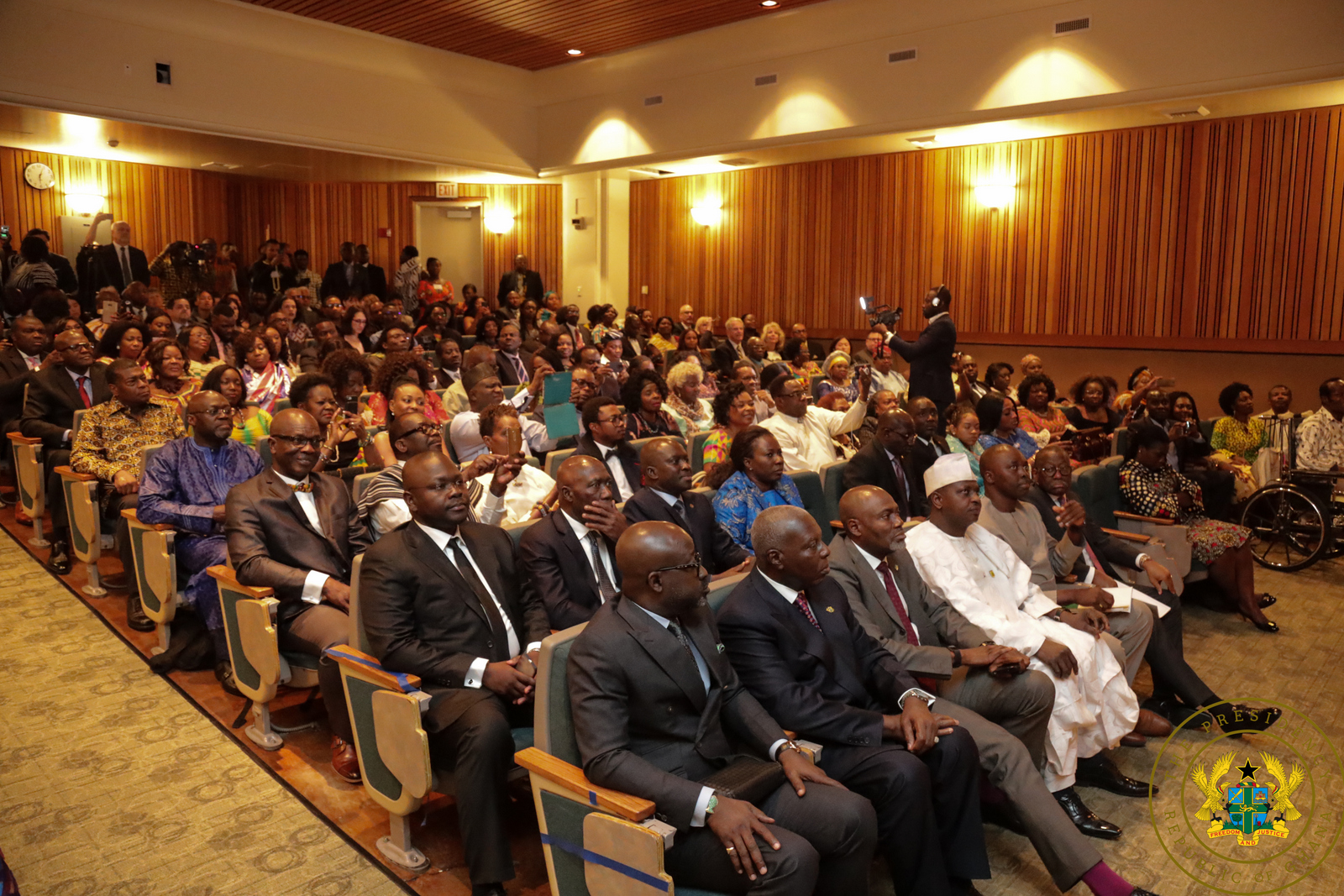 The President made this known when he delivered the keynote address at the 27th Africa Peace Leadership Awards, organised by the Centre for African Peace and Conflict Resolution of the California State University, Sacramento, on Saturday, 28th April 2018.

With pervasive poverty being Africa’s biggest problem, and which is likely to pose Africa’s most significant security threat, President Akufo-Addo stated that Africa needs to have peace to deal with this debilitating problem. 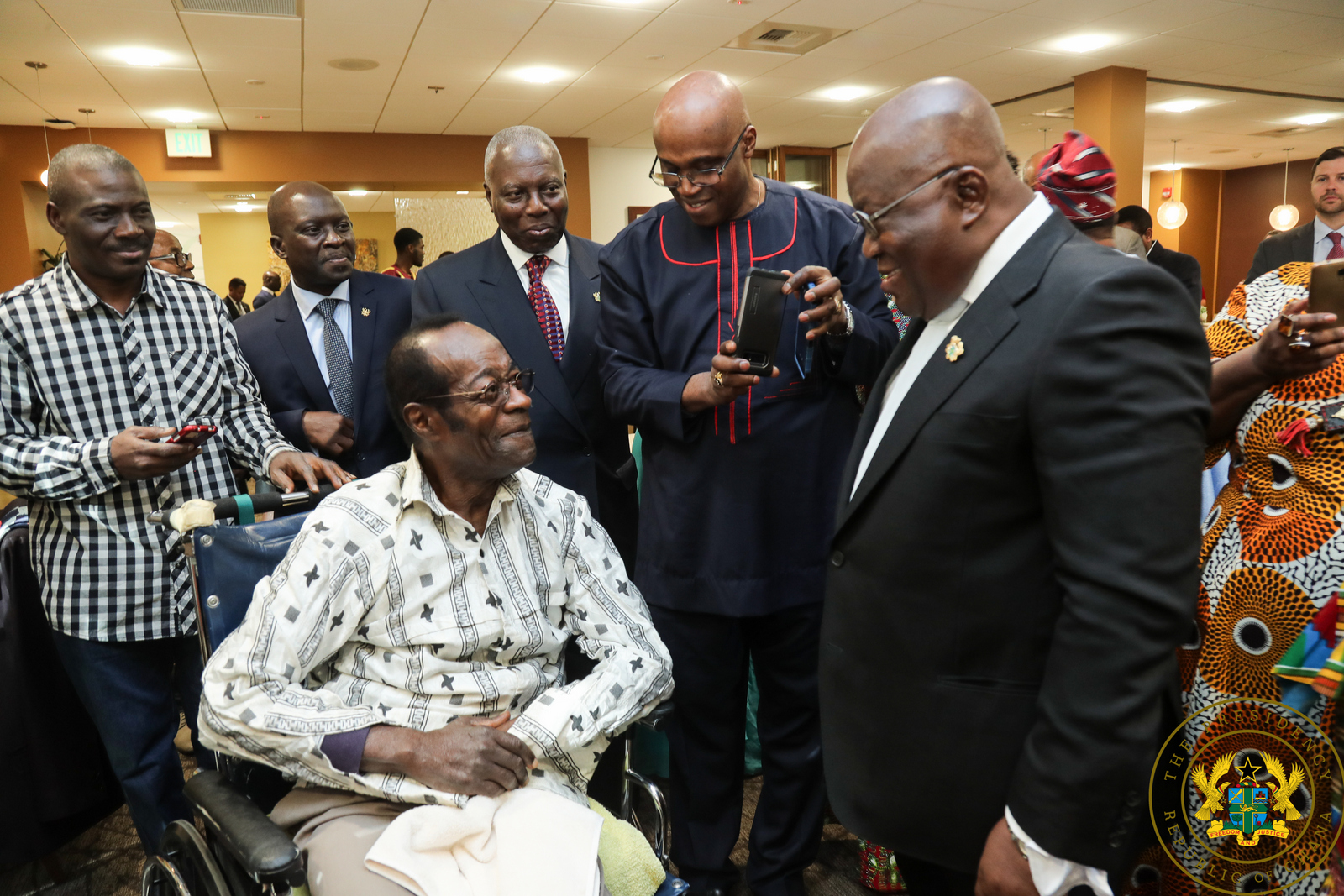 African leaders, the President noted must “have more self-confidence and accept that we shall never reach the level of development we aspire to by relying on aid or external assistance, no matter how generous. It is a mindset that I wish us to discard, a mindset of dependency and living on handouts; it is unhealthy both for the giver and for the recipient.”

He explained that the next generation of African leaders would have to understand that they cannot draw up their national budgets, with the expectation that a percentage of revenue will be coming from donor nations. 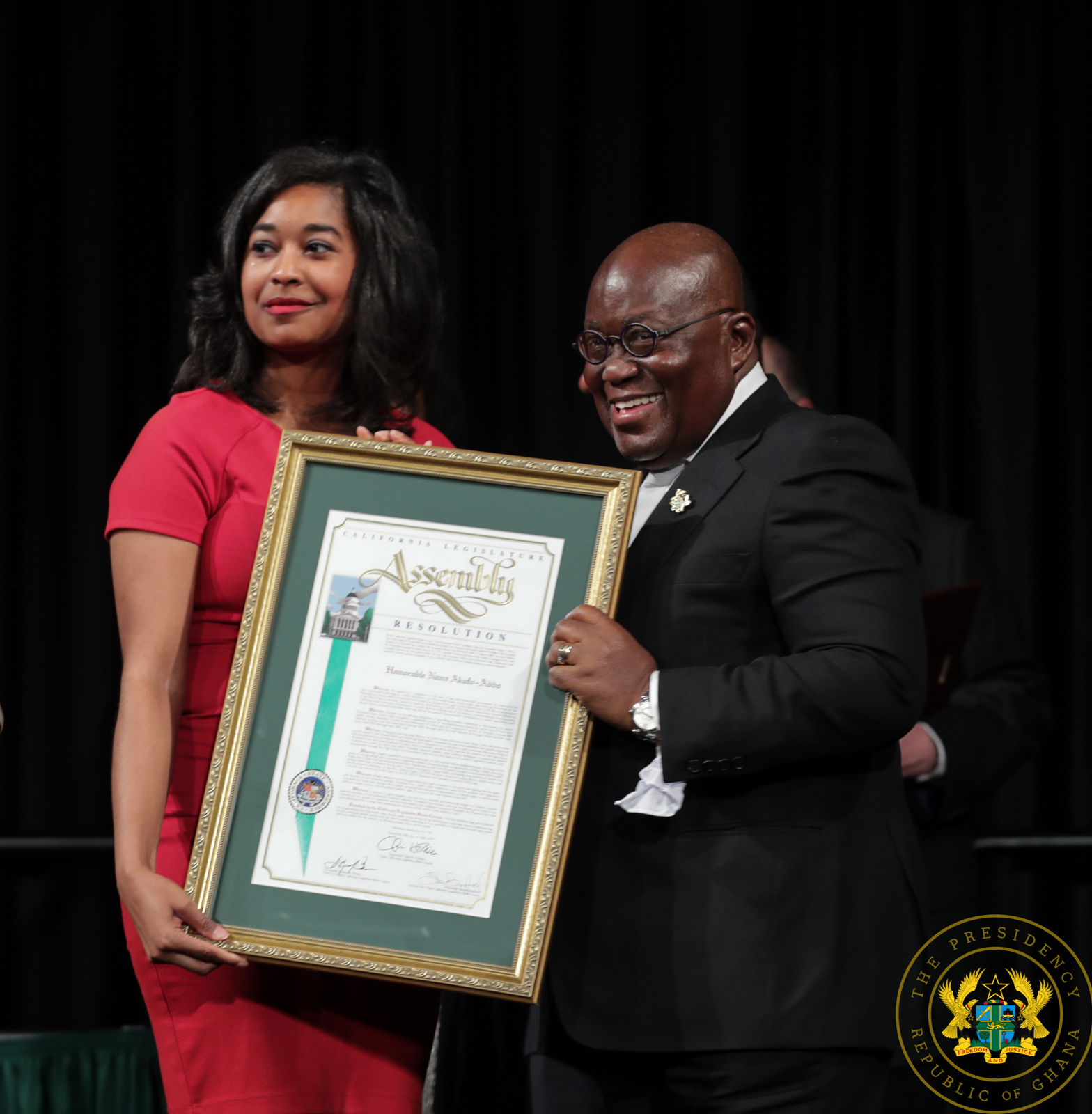 “They have to appreciate and work with the reality that, properly harnessed and efficiently and honestly managed, there are abundant resources on the continent to finance its development,” the President noted.

President Akufo-Addo stated that Africa is losing, annually, more than $50 billion through illicit financial outflows, urging the gathering to imagine the implications for Africa continent.

Touching on the creation and growth of an entrepreneurial economy in Africa, President Akufo-Addo explained that it provides the basis for undertaking the urgent task of the structural transformation of African economies.

“The next generation of African leaders will have to move away from economies, which are dependent largely on the production and export of raw materials, to value-added, industrial ones, and stimulate greater agricultural productivity, with the help of digital technology. This will accelerate economic growth, enable us to feed ourselves, and create the much-needed jobs for our youth”, he said. 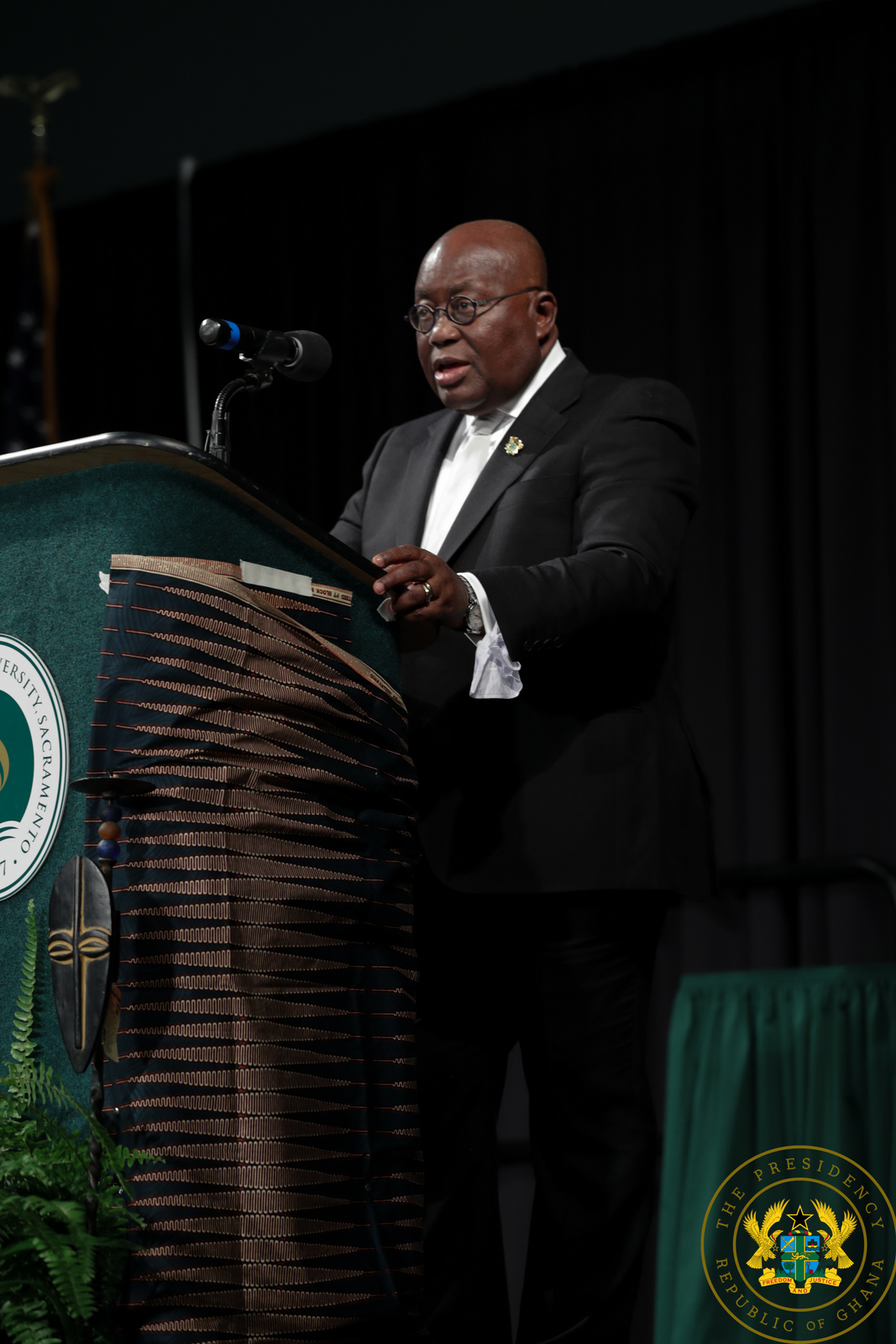 This process of structural transformation, he said, will be immeasurably aided by the successful implementation of the Continental Free Trade Area Agreement, which an overwhelming majority of African countries recently signed in Kigali, Rwanda, on 21st March 2018. Twenty-two states need to ratify it to bring it into effect.

The success of the free trade area, he noted, would mean that the era of low volumes of intra-continental trade that have defined the activities of the African economies will come to an end.

“An increase in intra-regional trade in Africa is the surest way to develop fruitful relations between our respective countries. It will mean a rapid increase in exchanges of our agricultural, financial, industrial, scientific and technological products, which would enhance dramatically our attainment of prosperity, and the prospects of employment for the broad masses of Africans, particularly our youth. Our economies would then be shaped not by the production and export of raw materials, but by the things we make,” he said.

While urging African leaders to protect their environment, President Akufo-Addo urged them to implement the 2030 UN Sustainable Development Goals, as “they represent the most ambitious plan the global community has yet devised to eradicate global poverty, and, hopefully, leave no one behind. There is no group of peoples with a greater stake in the realisation of the SDGs than the African peoples, for reasons that are self-evident.”

Despite the numerous challenges confronting the continent, President Akufo-Addo stated that “Africa is on the cusp of building a great, new civilization, which will unleash the considerable energies and huge potential of the African people’s civilization so that we will make our own unique contribution to the growth of world civilisation.” 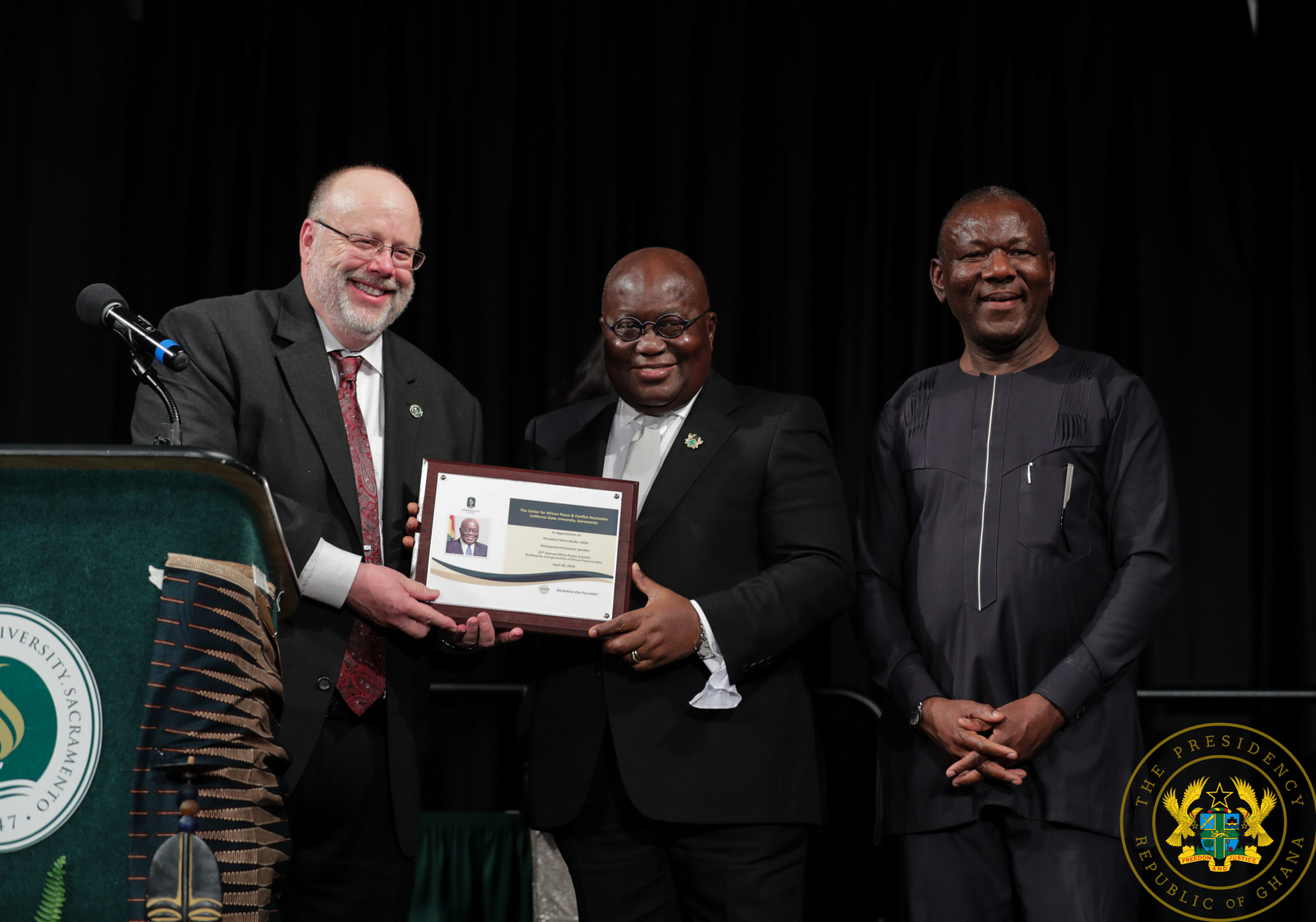 President Akufo-Addo was also given the Africa Peace Leadership Award by the Centre for African Peace and Conflict Resolution of the University.

Nobody funded my campaign – Samba