Kenya, Uganda and Tanzania crack down on ‘fake news’

0
SHARES
29
VIEWS
Share on FacebookShare on TwitterShareShare on Whatsapp

A new law in Kenya is the latest in East Africa to punish the spreading of “false information” and impose a lengthy jail term on offenders.

Critics of the “fake news” laws in Kenya, Uganda and Tanzania say they are meant to muzzle independent media.

The Committee to Protect Journalists had urged President Uhuru Kenyatta to send back the bill to parliament to remove clauses that it says violated press freedom and freedom of expression.

The rights body said that parts of the law criminalised unauthorised access and sharing of government data which would remove protection for whistle-blowers.

According to Kenya’s Editor’s Guild, the law “may be abused by state authorities to curtail media freedom”.

Why has the law been passed?

President Kenyatta said in a statement that the new law would provide a legal basis to prosecute cybercrimes, including child pornography, computer fraud and identity theft.

The law also criminalises “unauthorised interference” with a computer system saying that offenders will be fined $100,000 or five years in prison if it threatens national security or results in financial loss.

In March, several MPs complained of cyber bullying, with some lawmakers saying they had been receiving unsolicited nude pictures while others said their names had been used to open fake social media accounts.

What do critics say?

Nic Cheeseman, professor of democracy at the University of Birmingham in the UK, says that the push to pass laws to curb “fake news” on the continent is being driven by other agendas.

“There is a serious risk that, as has happened in the past with issues such as anti-terror legislation, governments manipulate a genuine issue in order to push repressive changes that are really designed to strengthen their own power,” he says.

Other critics say some clauses in the new law are an attempt to bring back a section of a past criminal law that found offenders liable for “undermining the authority of a public officer”, which had been used to arrest bloggers for posting comments online that some government officials did not like. 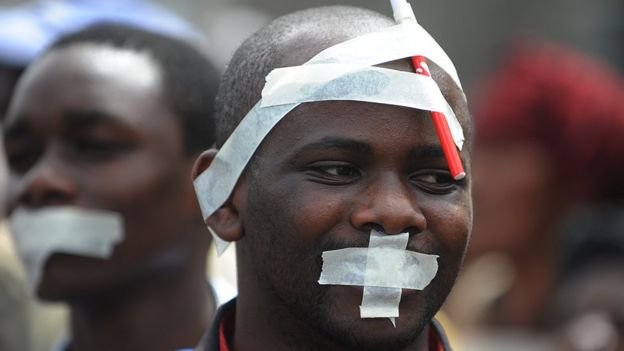 Some bloggers in Kenya have become big media influencers. They boast thousands, sometimes a million, followers on social media platforms and they are known to sell their influence in support of causes online.

Their reputation has earned them the moniker “keyboard warriors”.

They were especially busy during last year’s election, which was awash with false information on social media.

What is happening in Tanzania?

The situation is not dissimilar in neighbouring Tanzania where the authorities recently published new regulations which require bloggers to pay $920 for the privilege of posting content online.

The government says it wants to protect the East African nation from “lies” being spread online, although critics see it as a way of muzzling freedom of expression.

President John Magufuli says he aims “to weed out” what he refers to as a “disease”.

The new rules require all online publishers including bloggers, vloggers and podcasters to register and pay $480 for a three-year licence, plus an annual fee of $440.

The High Court however halted the 5 May implementation of the regulations after a group of activists and representatives from the media challenged them.

Tanzania’s Bloggers Network said it was worried about the impact the new regulations would have on its members, suggesting that some might have to stop blogging.

A co-founder of the country’s most popular website Jamii Forums, a messaging-board, which is dubbed “Swahili Wikileaks’, said it might consider closing because of a clause in the regulations that requires it to store contributors’ details for 12 months.

What about Uganda’s ‘gossip tax’?

In Uganda, President Yoweri Museveni’s government has put on hold plans for a “social media” tax after the finance ministry said that it would need to consult on how such a tax plan would be implemented.

Mr Museveni had proposed a tax on Facebook and WhatsApp, saying the revenue collected would help the country “cope with consequences of Olugambo [gossiping]”.

He said recently: “We are going to control it [social media]. We know who is spreading hate messages. We shall go for them. You must bring discipline in your systems”.

Critics say that the 73-year-old leader’s intention is to muzzle the press and those who are against his plan to run again in the 2021 elections. His government shut down social media platforms during the 2016 election.

At a recent meeting with media owners and editors, Mr Museveni urged them to “filter” news and not broadcast “lies”.

The head of the communication commission, Godfrey Mutabazi, said the inspiration to develop local platforms was to host online content in the country. “Instead of Ugandans, for example, visiting Twitter, they will have something local that they will be able to use,” he is quoted as saying.

Gov't to absorb cost for postgraduate training of doctors

Gov't to absorb cost for postgraduate training of doctors